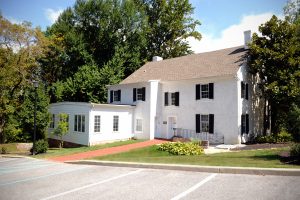 Along a well-traveled road of Lancaster Pike sits a well-groomed house of history, which lies just north beyond the intersection of Valley Road and Route 41. It is 260 years old! In that time, it has experienced much of the history that we can only read about in textbooks; the beginnings of Hockessin, the building of the town, its people and their professions, times of war, and its residents.

The origin of the name “Hockessin” is a mystery among most Delawareans, but one theory suggests that the name is derived from the Indian word, “Good Bark”, symbolizing the superior quality of white oak found in this area. One other theory suggests that due to the excessive red clay deposits that are located in the area, that the name was derived from the Germanic word “Hocken”, meaning red clay.

As a mainstay in Hockessin, the Fenimore House was witnessing the town’s growth in addition to interesting changes of its own. What started as a private home built by the Dixon family in 1763, the home quickly changed functions due to the changing landscape of the 18th and 19th centuries. During the battle of the Brandywine from the Revolutionary War, it was used as an infirmary to care for wounded British soldiers. The home then became known as “Strathworth.” Human services continued 75 years later, during the Civil War, and “Strathworth” was used as a part of the Underground Railroad.

The Civil War had quite an impact on Hockessin, and because there was a shortage of doctors, local residents resorted to seeking help from natural means for minor illnesses, many of which were learned from local Indians, or brought here from Europe’s finest doctors. Just as this building served as a hospital to care for and treat injured soldiers as well as other humane and worthy causes, “Strathworth”, and most recently the Fenimore house, is now awakened again, and is thriving as a modern healthcare venue, hosting spinal correction, chiropractic, and massage therapy.

Dr. Chad Laurence of Corrective Chiropractic is proud to occupy the downstairs space, which consists of 1,700 square feet. His exam room is located in the original part of the house and consists of Radiology, surrounded by an original bay window made of wavy double-paned glass. In addition to the interior fixtures, a beautiful expansive 900 square foot addition was annexed with several large windows overlooking the wilderness, chock-full of deer, foxes, birds, and wildlife. The consignments of this space include a private consultation room, spinal corrective chiropractic equipment, with two massage rooms and an acute therapy room, and are accented by recessed lighting that is used to enhance the natural light.

Inside this historical house, Dr. Laurence devotes himself to improving the thousands of patients that he has seen over the years. While he is committed to preserving the health of others, he is also preserving a piece of important history as well.